from 750+ reviews
View our testimonials

7 Infrastructure Projects In Sydney To Push House Prices Up

However, compared to the 2017 peak, house prices are still down 6.4% in Sydney – this is about to change.

More importantly, Sydney is poised to grow further because of two fundamental factors of growth:

The 7 major infrastructure projects in Sydney

7 infrastructure projects in Sydney that are expected to boost property prices of affected suburbs are:

Badgerys Creek airport, better known as the Second Sydney Airport, is due to be completed by 2026 at an estimated cost between $6 and $8 billion.

The airport located in Badgerys Creek, Western Sydney will have a massive impact on the property market in and around Western Sydney.

With the North West Rail Link now up and operational, work is already in progress to extend the Sydney Metro with a line from Chatswood to Bankstown. The new line will run under the Sydney Harbour and the CBD with a scheduled 2024 completion.

With the addition of the new line, it will make the commute to the city much more straightforward and easy.

The NorthConnex motorway tunnel in northern Sydney, NSW is expected to be completed in 2020.

This 9-kilometre tunnel once completed, will enable drivers to drive from Geelong to Newcastle without facing a single traffic light.

The final stages, including the Sydney Gateway in the WestConnex (mostly underground) motorway tunnel, are expected to be completed by 2023.

The freeway heading down to Wollongong now officially known as the M6 motorway will connect Wollongong and the Sydney CBD. It will open for motorists by the end of 2025.

This roadway will provide better connectivity to Sydney’s south.

The Western Harbor tunnel and the Northern beaches link

The construction on the main tunnel between Rozelle and North Sydney is tentatively set to begin this year with the full project completion date set for 2025.

The Sydney light rail opened in the heart of Sydney in December 2019 with passenger services now running between Circular Quay and Randwick.

With the Kingsford Line (L3) set to open by March 2020, the light rail combined with the bus network will improve public transport access to Moore Park and Randwick along with the University of NSW, TAFE and health precincts.

Top Sydney suburbs to keep an eye out on in 2020

Interestingly, some of these infrastructure projects overlap, and those areas/suburbs are where experts see the biggest growth happening.

There are three key suburbs in Western Sydney which are forecasted to grow by 6% p.a. for the next eight years, according to Residex. They are:

In inner-West Sydney, suburbs to keep an eye on are:

The three suburbs in Northern Sydney to look out for are:

You can learn more about what to look for and avoid when choosing a location for an investment property.

Here are the top performing Sydney suburbs of 2019. 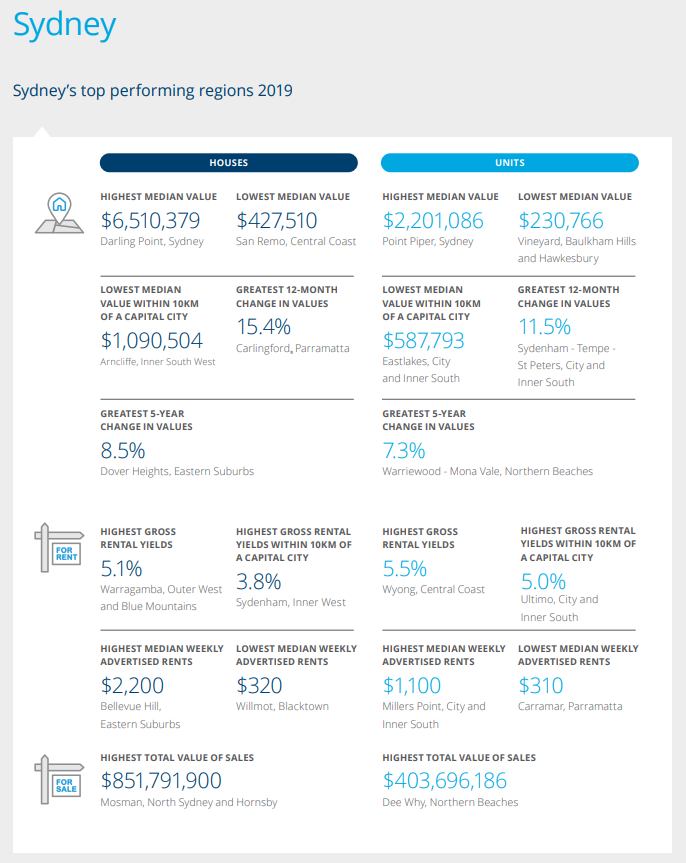 Are you looking to buy property in Sydney?

Buying in Sydney can be very fast-paced than buying elsewhere because most properties are sold at auction. Often you’ll have to waive your right to a cooling-off period.

Get pre-approved for a home loan before you start going to auctions or enter into a private sale. Our brokers recommend getting 2 or more pre-approvals as it is very risky to have just one lender who can assist.

Speak with one of our specialist mortgage brokers by giving us a call on 1300 889 743 or by filling in on our online assessment form today.