Sydney dwelling values rose by 6.2% during the fourth quarter of 2019, followed closely by Melbourne dwelling values, which increased by 6.1% — a very good sign for the Australian property market.

Housing markets in both Sydney and Melbourne gained momentum in the Australian property market by the end of 2019, posting a 5.3% increase in annual dwelling values.

Even when most of the other major property markets showed lagged growth in housing prices, the incredible turnaround in Sydney, and Melbourne property markets actually pushed national dwelling values up by 2.3% by the end of last December.

This has allowed Australian real estate to regain its footing in the market, although the values are below the record highs of 2017; Sydney is down by 6.4% and Melbourne is down by 2.3% while the overall housing market is only 3.1% below when compared to their 2017 peaks.

What’s driving the property market in Sydney and Melbourne?

According to Tim Lawless, CoreLogic’s head researcher, the cash rate cuts, relaxation of serviceability (borrowing power) by APRA, and positive shock from the election applied to all housing markets, however, the remarkable turnaround across Sydney and Melbourne house prices can be further explained by:

The New South Wales (NSW) and Victoria (VIC) housing markets both have existing exemptions for first home buyers when it comes to stamp duties on owner-occupier (not on investment) properties.

For instance, under the First Home Buyers Assistance scheme, the first home buyers in NSW are exempt from paying stamp duty when purchasing homes under $650,000. Similarly, in Victoria, first home buyers are eligible for the same when they buy a residential dwelling under $600,000.

This translates into savings of roughly $30,000 for each prospective first homeowner, it acts as an added incentive for potential first home buyers to get into the property market.

Plus, the implementation of the new First Home Loan Deposit Scheme is all set to help first home buyers get into the market sooner.

In addition to these exemptions on the demand side, there has been a modest improvement in affordability across the major housing markets as reported in the latest ANZ Housing Affordability Report Nov 2019.

The data indicates that dwelling value to household income has lowered this year for both Sydney, and Melbourne markets as compared to the previous year.

This indicates that Sydney households are expected to spend 0.3 times less of their gross income to afford the median price of a dwelling compared to the previous year.

Similarly, Melbourne households will have to spend 0.4 times less gross income to afford the median price of dwelling.

As for the number of years it takes to save a 20% deposit by saving 15% of a household income, Sydney dwellers are expected to take 11 years, and Melbourne dwellers are expected to take 9.6 years as of June 2019. At the end of December 2018, however, Sydney was looking at 11.4 years, and Melbourne would have taken 10.1 years. So, there is a bit of improvement there as well.

It’s important to note that housing affordability peaked in June 2019 following the drop in housing values nationwide. With the fast resurgence in property values over the last quarter and predictions of continued growth in 2020, affordability will continue to worsen. 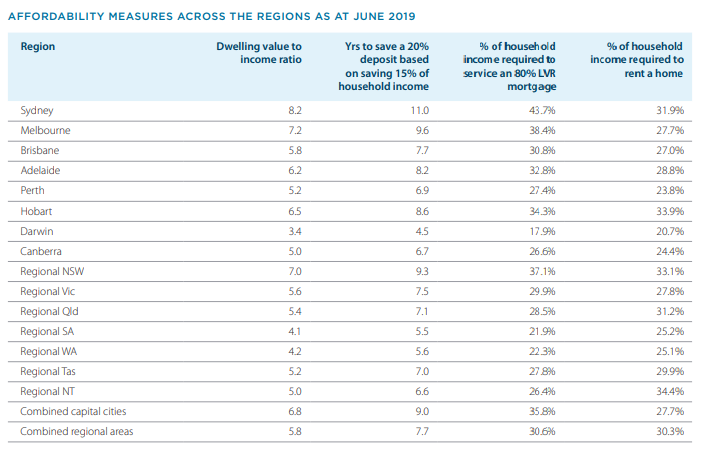 Moreover, from an economic perspective, Sydney and Melbourne showed strong population growth, thanks to positive growth in the job market and a lower unemployment rate.

About 80% of the national job growth came out of NSW and Victoria this past year. NSW and Victoria are also the only two states with unemployment below 5% and higher Gross State Product as compared to the other states.

Lastly, there has been a surge in investor participation in both these markets as housing demand rises, fueled by population and job growth, and lower unemployment rate.

According to the Australian Bureau of Statistics (ABS) data, investors accounted for 32% of mortgage demand in NSW and 26% in Victoria – both higher than the other states. This trend of investment will certainly create more competition in the Sydney and Melbourne property markets and possibly push housing prices upwards.

All these distinct factors have significantly boosted the performance of Sydney and Melbourne housing markets compared to all other cities making them two of the most buoyant Australian property markets in 2020.

No wonder, all eyes are on Sydney and Melbourne!

Are you looking to buy a property in Sydney or Melbourne?

One of the common mistakes we see first home buyers and even property investors make is that they start looking for properties before they’re pre-approved.

We’ll help you get an indicative approval for the amount that you can borrow so that you can confidently bid at auctions.

However, to get started on your pre-approval, please fill in our short no-obligation enquiry form or give us a call on 1300 889 743.