LMI Waiver For Accountants With A Foreign Degree | Client Story

LMI Waiver For Accountants
With A Foreign Qualification

What gets a deal over the line?

Bank policies are rigid and their systems will outright decline your application if it doesn’t fit into neat little boxes.

This is especially true for home loans with a LMI waiver for accountants. Here’s how we saved a client tens of thousands in LMI fees.

Recently, Andy, a CFA (Chartered Financial Analyst) and Mary enquired with us looking to buy an owner-occupied property for $1.4 million.

The couple was looking to borrow roughly $1.26 million or 90% of the property value and get the Lenders Mortgage Insurance (LMI) waived.

Andy was registered to practice as a CFA in Australia and had over ten years of experience in the industry.

In addition, they both had a perfect Equifax Score.

Our senior mortgage broker Vivienne Than first spoke with the client and quickly established their needs and objectives.

Then after finishing a preliminary assessment which identified three potential credit issues, namely that:

From there, Vivienne identified a couple of lenders that could accept this deal without having to compromise on any of the couple’s objectives.

Andy was an Associate of The Institute of Chartered Accountants in England and Wales and held a membership with the Chartered Financial Analyst Institute (CFA).

Because of the potential issues before submitting the application, Vivienne ran the scenario directly with the bank.

Surprisingly, the bank was unwilling to accept his membership with the “CFA Institute” as it was not on their list of recognised industry bodies.

Our broker, Vivienne, requested an escalation on this file to the bank’s credit department for review with strong supporting documents and arguments.

She argued that the CFA Insitute is a widely recognised international organisation with over 1200 Australian members. Whereas, “Chartered Financial Analyst Institute Australia (CFAIA)” is a non-existent organisation.

No one can be a member of an organisation which does not exist. The first search that comes up in this Google search is “CFA Institute” which the client is a member of and had the certificate to prove it. 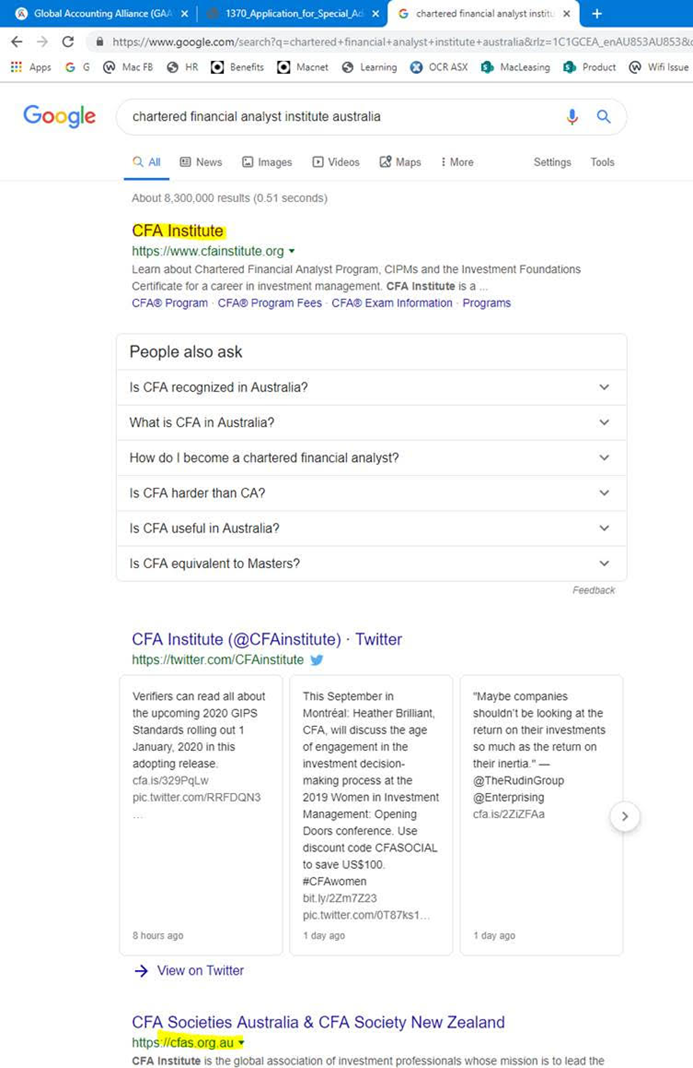 All in all, to further support the argument:

After a few days of back and forth with the bank’s credit department, the client was approved for the full loan amount and received the full LMI waiver.

The bank changed its qualification and employment criteria to accept CFA Institute membership from then on.

Interestingly, we had first placed the deal with this particular lender because they can do lmi waiver for accountants with no restriction on the loan amount.

However, another major lender who also offered waived LMI but had a ‘4 times the income is the loan limit’ changed its policy. For example, if your annual income is $150,000, you could only borrow 4 times that which is $600,000 to be eligible for the LMI waiver.

So when this lender removed its income requirement, Vivienne approached the client again to help him with a second pre-approval.

Primarily because he is looking to buy in the inner west Sydney and most properties there are selling at auction. It is very risky to have just one lender who can assist.

She then approached the second lender and had that deal approved for him as well.

Now, the couple is going to auction with great confidence because they’ve been pre-approved by not one but two lenders.

All in all, this ensured that Andy will receive a highly competitive interest rate and will save tens of thousands of dollars in LMI fees with their mortgage.

Are you an overseas trained accountant?

Over the years, our mortgage brokers have developed strong relationships with almost 40 lenders on our panel, and it is often be the difference in getting a deal over the line.

For expert advice, give us a call on 1300 889 743 or fill in our online assessment form to discuss your needs.