Australia’s housing market is still going through a rebound, with a 0.9% increase in the home value index during the month of January.

The Australian house market continued its upward rise in January 2020 across all capital cities according to the latest CoreLogic data.

It should not come as a surprise that Sydney and Melbourne were strong performers and were up 1.1% and 1.2% respectively, even with the slowing growth pace from December 2019.

Even Perth and Darwin’s property market saw an increase with both cities rising by 0.1% month to month.

Sydney, Melbourne and Canberra maintain their spot as expensive cities and have the top three median dwelling prices – Sydney’s median value was $862,814, Melbourne’s was $681,925 and Canberra’s was $630,078. 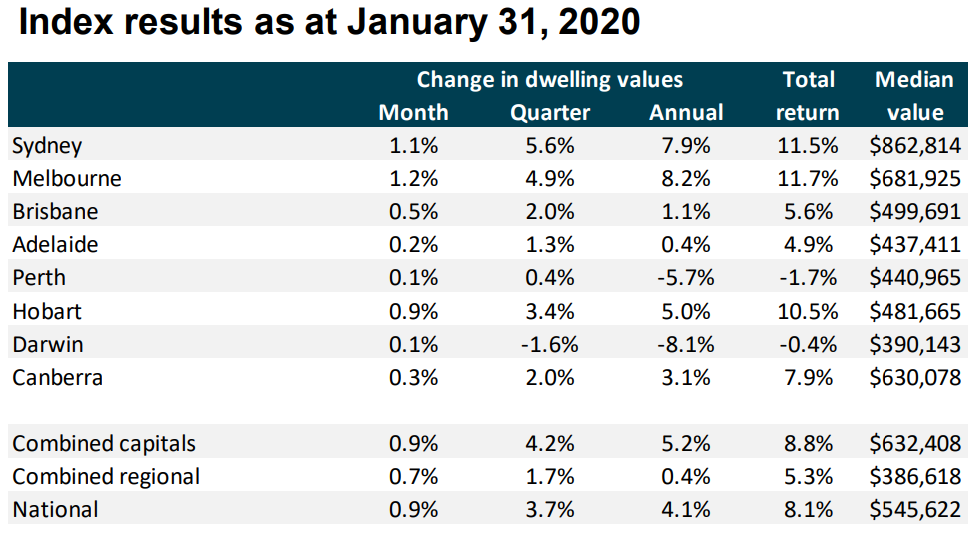 Looking at national annual data, there was an 8.5% increase in the value of upper quartile property while lower quartile saw a decrease of 0.2%.

While Brisbane experienced a lower increase than Sydney or Melbourne, it’s top quartile market still grew by 1.3% compared to the lower quartile growth of just 0.3%.

The lower quartile values of the capital cities provide a good entry point into the property market.

Looking at the CoreLogic Hedonic Home Value Index of January 2020, it is now more expensive to buy a unit in Melbourne than anywhere, besides Sydney and Canberra.

A curious phenomenon happening in Darwin is that its population is actually in decline!

According to the Australian Bureau of Statistics 2018 data, Darwin lost 355 people from its population of 148,564.

Darwin is also the least profitable city in terms of property sales, as nearly half the dwellings on the market are selling at loss, making it the weakest performing capital city for the quarter at -1.6%.

However, Darwin still has the highest rental yields at 5.8% p.a.

Poperty trends that will likely shape Australia’s housing market in 2020.

Are you looking to buy property in 2020?

It’s best to get pre-approved for a home loan before you start looking for a property if you don’t want to miss out on your ideal property.

Whether you’re buying your first home, or a seasoned investor looking to grow your investment portfolio, our award-winning brokers are here to help.