This month has a significant increase as the values across five of Australia’s eight capital cities reaches a record high.

According to CoreLogic head of research Tim Lawless, “At the current run rate of growth, the national index is likely to reach a new nominal high over the next two months.” 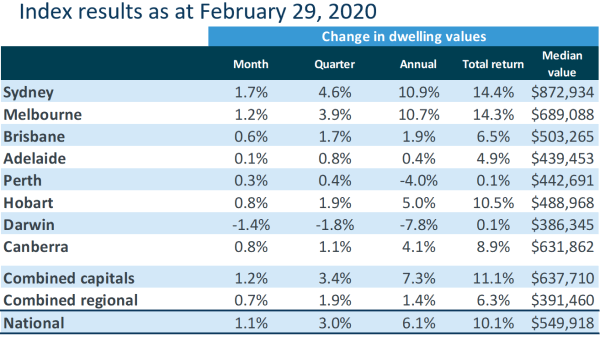 The strongest capital gains are Sydney (+1.7%) and Melbourne (+1.2%), while the remaining capital cities record a more modest rise, with Darwin the exception where home values were down 1.4% over the month.

What’s happening in Sydney and Melbourne?

Both Sydney and Melbourne moved back into double-digit annual growth rates, with values up 10.9% and 10.7% respectively over the twelve months ending February on an annual basis.

The latest results continue the recovery trend that has been running since June last year, following a peak-to-trough decline of 8.4% in the national index, with massive falls in Sydney (-14.9%) and Melbourne (-11.1%).

Melbourne is the most recent city to stage a nominal recovery with housing values surpassing the September 2017 peak last month.

It has joined with Brisbane, Canberra, Hobart and Adelaide where housing values are also tracking at record highs.

While there is large variability in capital growth from region to region and across the product types, every capital city excluding Darwin is showing an upwards trajectory.

This demonstrates that a geographic broadening in the recovery as low mortgage rates and better access to housing credit fuel buyer demand.

Since finding a trough last year, the national index finished February only 1.2% below its 2017 peak.

Long-running downturn over for Perth

Further evidence shows that Perth housing market’s dwelling values increased by 0.3% in February, marking four consecutive months where dwelling values have avoided a fall; a trend not seen since the market peaked in mid-2014.

Tim Lawless said, “Although Perth values are now trending higher, the recovery period is likely to be a long one, with Perth housing values remaining 21.0% below their peak.”

Meanwhile, the regional centres adjacent to the largest capitals, as well as coastal lifestyle markets, show a more reliable performance.

According to CoreLogic, the upward mobility of prices is mostly being propelled by:

Houses are performing better than units!

CoreLogic head of residential research Eliza Owen said, “It is no surprise to see the Launceston and North East region of Tasmania topping the list for capital growth.”

As we look forward to the rest of 2020, the regions likeliest to see continued growth are high amenity areas with proximity to major capital cities.

As housing affordability becomes a resurgent issue in 2020, capital city residents may once again seek relatively affordable housing in nearby regions or regional areas with high levels of amenity.

Auction markets showed top results in February. In the final week of February, there were 2,933 capital city homes taken to auction, returning a preliminary auction clearance rate of 77.1%.

This week’s volumes are higher than last week’s 2,517 auctions held, which returned an only slightly higher preliminary clearance rate (77.7%), later revising down to 72.7% at the final figure.

In Melbourne, Australia’s largest auction market, a preliminary auction clearance rate of 77.1% was recorded. The data was of 1,567 auctions on the fourth week.

Are you looking to buy property in 2020?

If you’re looking to purchase a property, our award-winning brokers are here to help.